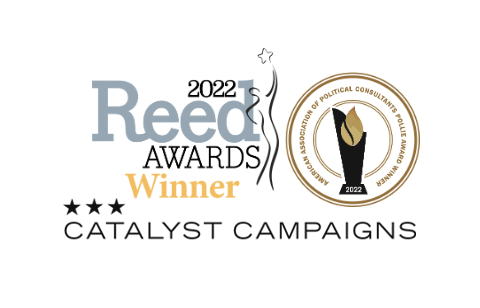 Catalyst Campaigns is honored to receive two top industry association awards for the work their team did on behalf of the National Women’s Soccer Players Association (NWSLPA) and their historic first collective-bargaining agreement with the NWSL.

Scott Goodstein, Founder & CEO of Catalyst Campaigns, stated, “Our goal is to creatively amplify our clients’ voices and use the best-in-class technology to rapidly deliver the right message, at the right time, in a way that seizes the public consciousness.”

Meghann Burke, Executive Director of NWSLPA said, “Scott Goodstein and the Catalyst Campaigns created innovative ways to shift the public narrative to reflect the lived realities of women’s professional soccer players while issuing a call to action. He and his team are all-in organizers who understood how to navigate fluid situations, while constantly generating new creative ideas.”

Some of those creative campaigns include:

The campaign’s website served as a hub to highlight the players’ plight, reframe the conversation and deliver facts and statistics to advocate for change.

T-shirts and stickers with the URL drove additional traffic to the website, further increasing fundraising and petition signatures. The Players Association’s social media presence doubled in size, and their low-dollar fundraising efforts tripled.

The 2022 Campaign & Elections Magazine Reed Awards recognized SupportthePlayers.Net for its best-in-class creation of a rapid response logo branding that matched the message and the moment.

The branding was built to channel the energy and give grassroots supporters direction to make an impact. The logo is a shield to protect the players, and its other elements allude to both a physical soccer net and a social safety net. Catalyst created an acronym for the organization, National Emergency Trust (“NET”), so the URL practically reads as a command: SupportThePlayers.NET.

The website is delivering immediate and tangible relief for current and former women’s professional soccer players in urgent need.

Catalyst Campaigns is a full-service digital campaign, brand development, and strategic communications firm. Founder, Scott Goodstein, has been at the forefront of evolving new methods of digital communications for over 20 years. He organized anti-war campaigns using MySpace, built the first social media and mobile campaign for Barack Obama’s 2008 presidential campaign, and lead the development of Bernie Sanders’s digital strategy in 2016, before going on to build progressive political movements around the globe.